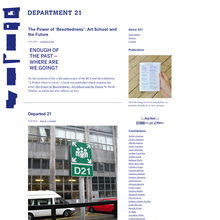 Department 21 has been founded in 2009 at the Royal College of Art in London by a group of 10 students studying in different departments of the college (Bianca Elzenbaumer, Fabio Franz, Polly Hunter, Carmen Billows, Callum Cooper, Melissa Gamwell , Sara Muzio, Anaïs Tondeur, Ottilie Ventiroso and Oliver Wainwright). It has an interdisciplinary student-led agenda, that is more interested in learning processes rather than final results and challenges the educational choices made within college.

For a period of 8 weeks in January, February and later June 2010, Department 21 also had a physical location within college where to experiment with alternative modes of education.
This academic year, Sophie Demay and Bethany Wells are re-negotiating a space for Department 21 - lets hope it works out.

The events organised within and by Department 21 are open to everyone, but until now permanent workspaces within Department 21 (when it had a physical location) were only assigned to RCA students.

At the end of the academic year 2009/2010, the group of students involved published a little book.